With more than two billion active Facebook users a month, it is no secret that people and companies that want to effectively reach people use Facebook to do so. That’s why in February 2017, Facebook unrolled its newest feature: Facebook Jobs. With Facebook Jobs, business pages are able to post job openings on a platform that people are already comfortable using and reach job searchers who are not on LinkedIn. 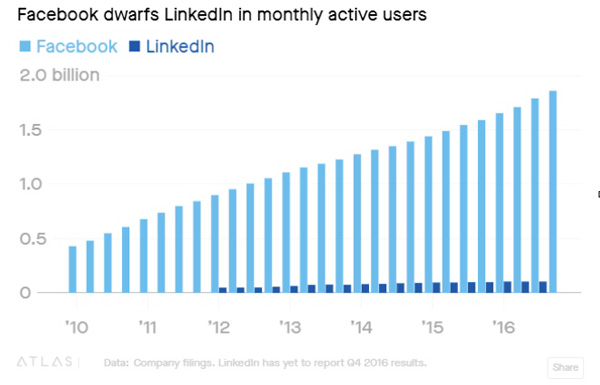 As you can imagine, the ability reach more applicants and to speed up the application and hiring process was an instant success. Job searchers are now able to directly send an application through Facebook Messenger with just the click of “Apply Now.” Facebook then auto fills relevant information from the users profile and sends it to the hirer, who is able to sift through applications and even message the applicant back. To promote the position hirers can pay to put their job in front of a larger audience and Facebook users are able to send jobs to friends that may be interested or qualified, leading to an increased talent pool.

This streamlined process took off among small businesses, especially because it filled a need that LinkedIn hasn’t: it is a user-friendly job-searching method for those searching for part-time, hourly or skilled labor roles. Because of LinkedIn’s focus on resumes and thought-leadership, Facebook created a platform that appeals to a wider audience, and even for an audience that might not be on LinkedIn because they are not actively seeking a new job, although they may be open to one. In fact, only 36 percent of all job seekers have a LinkedIn account and only 14 percent of those who do check it on a regular basis! Compare that to the 80 percent of job seekers who use Facebook regularly, it’s easy to see why Facebook should be part of your company’s recruitment strategy.

For example, a TechCrunch article profiled the owner of Striper Sniper Tackle who was having trouble finding employees with the specific skills he needed. He posted the job openings to the company’s Facebook page rather than to LinkedIn due to the highly specific nature of the jobs. He received 27 applications immediately and hired 10 people. “Those jobs probably wouldn’t appeal to LinkedIn users, and some of those who applied probably didn’t think they were job hunting when they opened Facebook,” said Josh Constine of TechCrunch.

Here at Sturges Word, we recently deployed a recruitment campaign for Faultless Healthcare Linen. It was looking to fill maintenance technician and production operator roles, so we turned to Facebook Jobs to help them reach a wider audience than they would be able to on LinkedIn. We worked closely with Faultless’ human resources team to learn more about the jobs and their ideal target audience’s education, experience and qualifications. To make our posts stand out, we created eye-catching imagery, copy that best described the positions and why job seekers should apply, and we used our social media expertise to target the ads for the best results. Our tight targeting helped the ads reach the right audience, costing just 10 cents a view! And not only did qualified candidates see the posts, but they applied for the jobs as well. Faultless received 26 applications from qualified candidates in just a week.

This is not only a great example of what Facebook Jobs can do for your hiring process, but why it’s crucial to know your target audience!

Want to get to know us better? Let’s Chat!